Created in May and June of 2013 within the time frame of 32 days. It provides around 30 to 60 minutes of gameplay.

It is set in an ancient Nordic tomb that has been reclaimed by Cultists of Arkay, a bandit sect who worships the dead. As of recently, their presence has somehow disturbed the Draugr who are determined to drive the imposters out.

Link to a 1:42 long preview video, made by "Brodual", can be found here: YouTube video link

Link to a 29:52 long 'speed run' style playthrough video, made by "Blood Is Syrup", can be found here: YouTube video link

Link to a 1 hour long detailed playthrough video, made by "Andrew All Stars", can be found here: YouTube video link

-To make a general setup where player will be fighting against the dungeon imposters such as Bandit faction. And, after that, player keeps encountering the dungeon inhabitants such as Draugr faction.

-To have two mini-Boss fights: first fight being optional and second one being mandatory.

-To end the dungeon with a medium size 'epic' room and a Boss battle; in this case, the Draugr Lord named Lord Ogmund. After the fight, player should be able to quickly loop back to the beginning of the dungeon via secret door.

-To use at least one puzzle or trap section as a mean to control pacing and variety.

-To keep everything balanced and cohesive, from encounters and vistas to loot placement. The player's trust should never be broken with out-of-place design.

Main goal here was to emphasize the differences between the Bandit and Draugr factions as much as possible. So, in the early part, while fighting Bandits, player is given the opportunity to ambush his/her enemies. Then, this gradually evolves into player being ambushed by Draugr enemies who are popping out of coffins or dark corners.


The most important encounter was titled the 'Dining Room'. It happens at the mid-point of the first section, where Bandits are being jumped by a Draugr party during supper. Player is able to observe the entire fight from a vantage point and take any action he/she sees fit. Proper testing was conducted in order to make sure that design is giving the Draugr a slight advantage over Bandits, no matter how leveled the player may be at that point.

Whenever possible, the enemy spawns were organized in somewhat circular pattern. On the shot below, player enters the room with a single enemy (Guardian) patroling in front of the gate. When player gets too close to the Guardian, other enemies start popping out of their coffins in a sequence, with two enemies being active at a single time.


So, to survive such attacks, player has to move around the room and plan for his next move. This keeps player engaged during the whole encounter.

Also, an effort went into arranging enemy patrols in a way that will allow enemy waves to 'mix' and make crossovers into one another. By doing so, all encounters appear to be more 'organic', thus improving the immersion, because it feels as if player's actions are interrupting the enemies in their daily routine. The screenshot below shows the 'Bridge Room' and how two different Draugr enemies use patrol routes with a slight crossover near the archway area.

One thing I often do is to build the most important rooms first. Such 'key rooms' are located inside the same cell, but without any corridors between them. By not committing to room connections at this early stage, I can quickly iterate on all such rooms without thinking much about the layout composition.

After I am happy with how each of the key rooms play out, I would start connecting them in the most logical way. For that, I would often capture 'Top View' screenshots of the level and start making arrangements inside of a 2d painting program. By using color coded masks, I can quickly draw rectangle shapes that represent rooms and corridors. While doing so, I am considering things like draw distance & optimization, player's progression, pickups, landmarks & vistas, storyline points and so on. I am also placing down notes about how to make any 'filler' content to feel a lot less like, well... a 'filler' content.

Finally, I will pick the layout winner and start assembling the actual 3d rooms inside of Skyrim Creation Kit's editor. That is being followed by NavMesh stitching until everything is assembled into a proper, linear progression toward that section's goal. 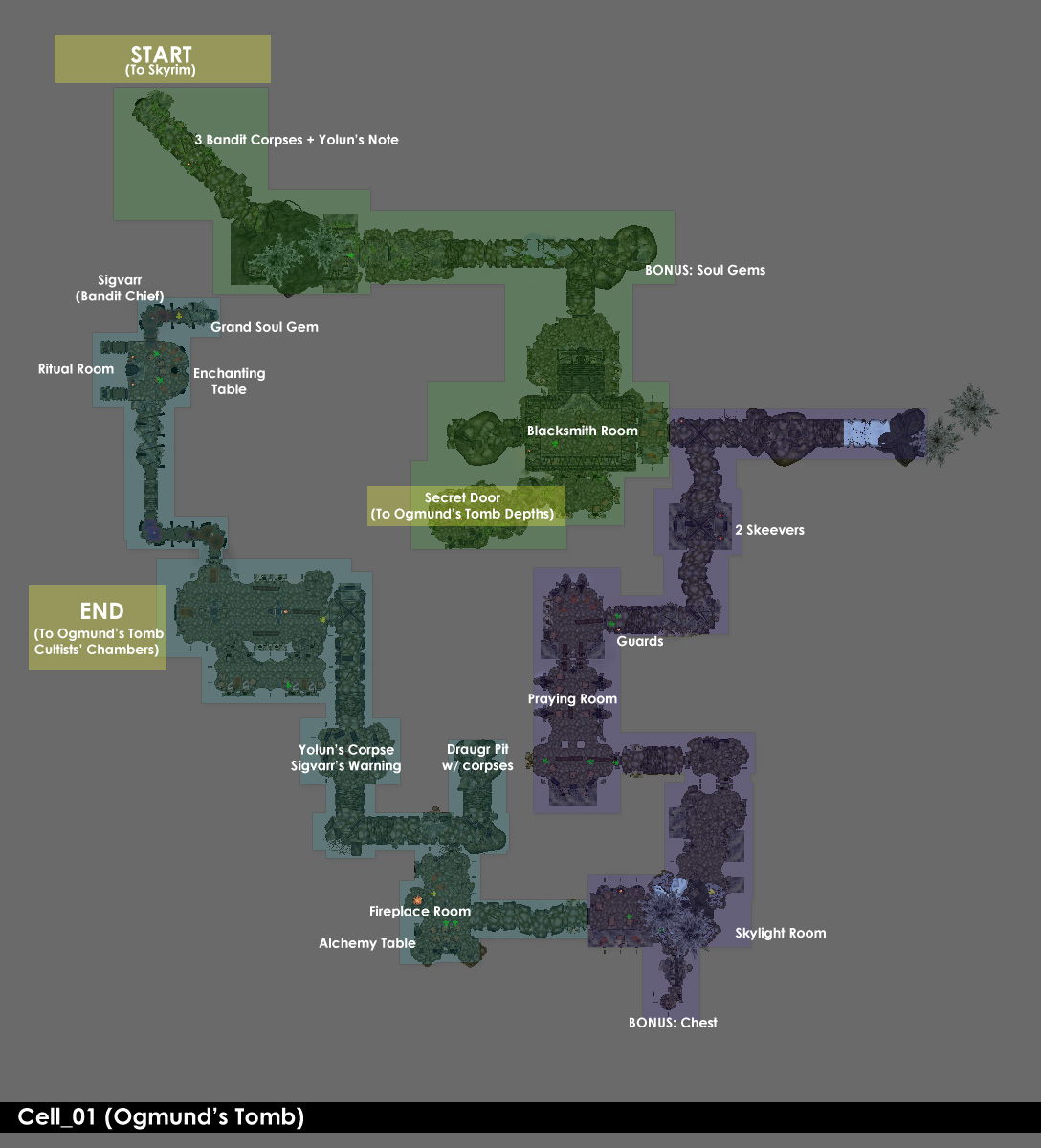 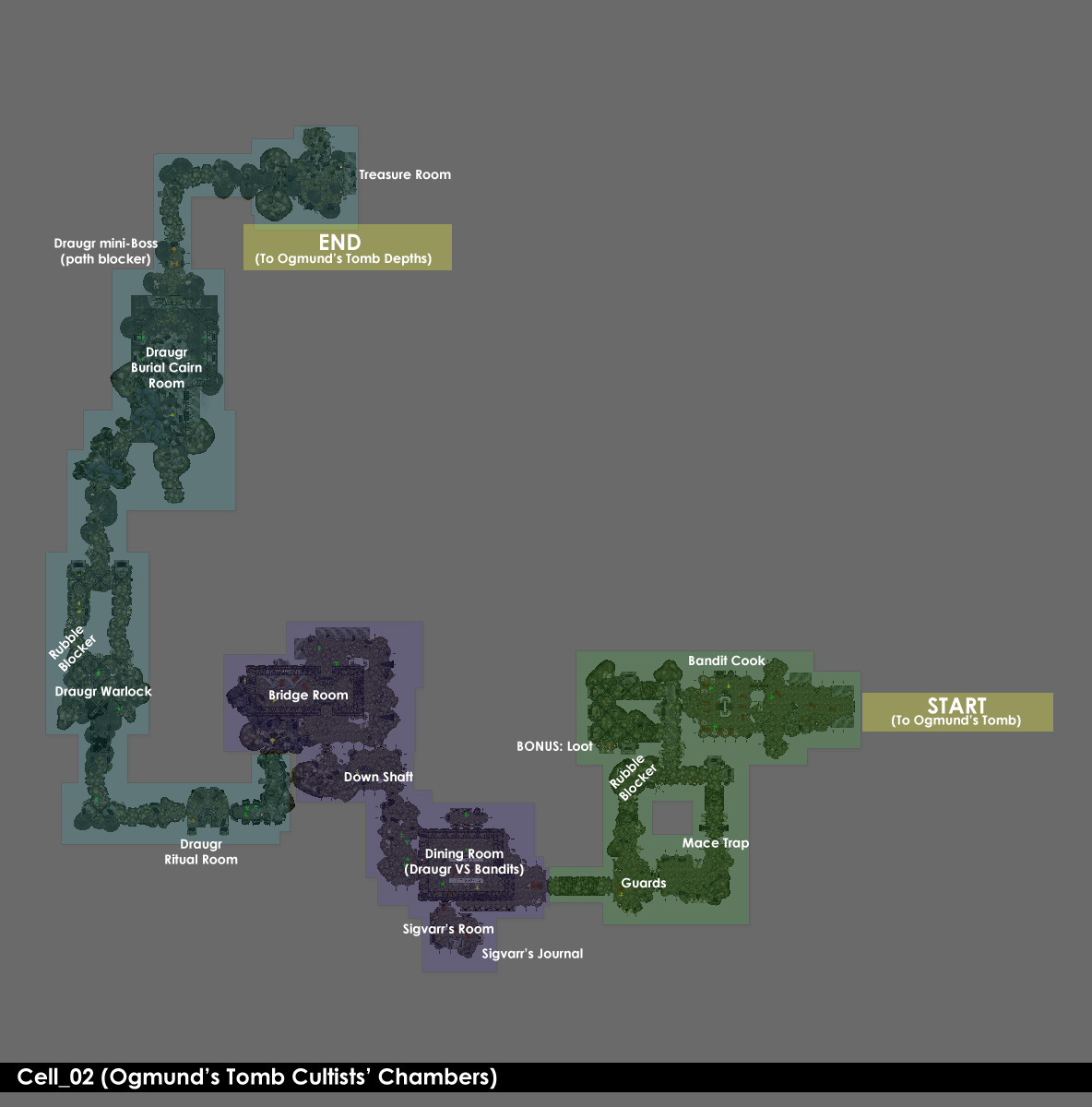 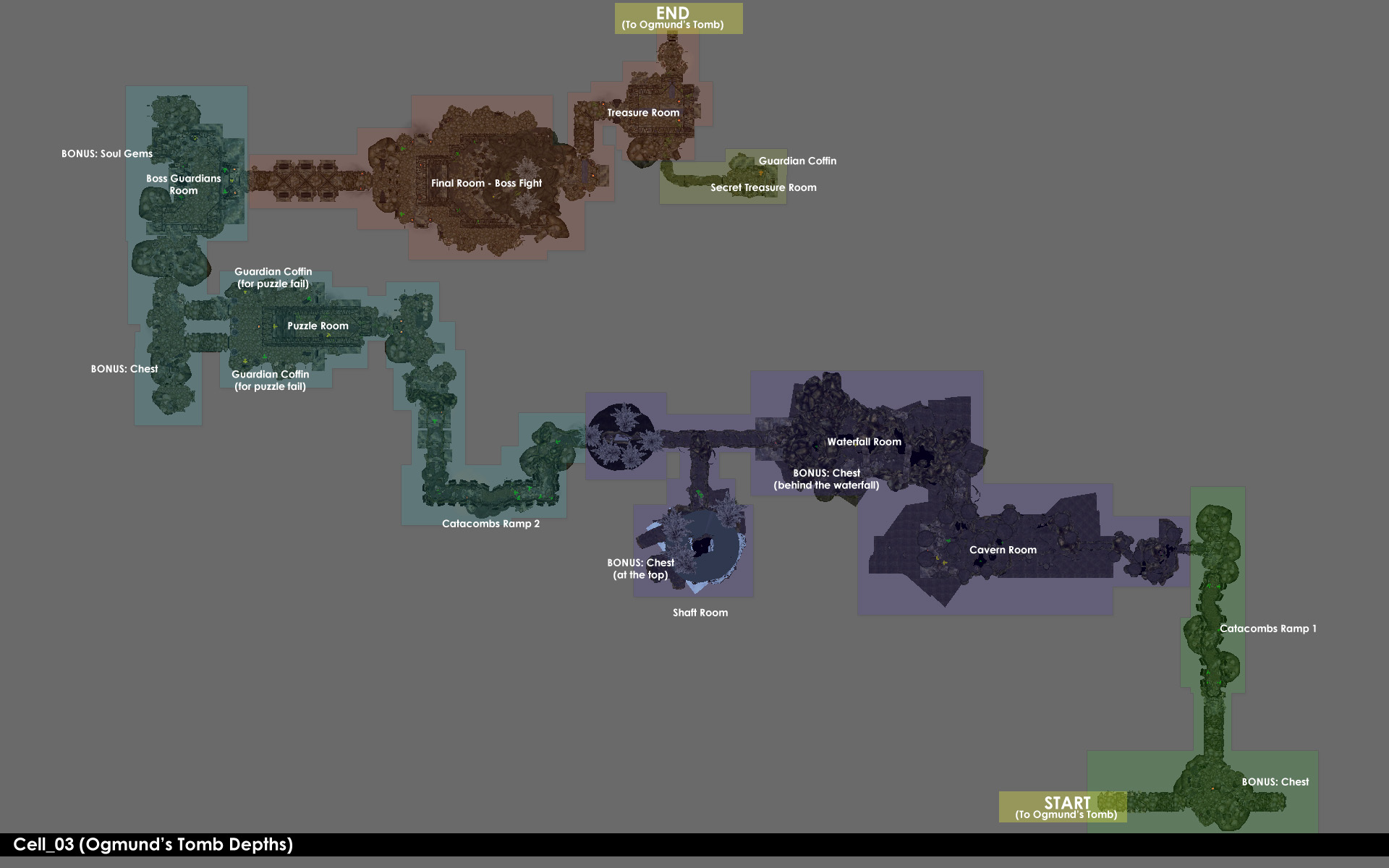 Initially, Cell_01 and Cell_02 were just one big cell, using 95% of available 'level memory', which caused problems on some systems. To solve that, I splitted that Cell into two Cells at the most logical point and then rearranged the loading areas slightly so that they fit to the dungeon's setting and storyline.


The same process is being repeated for the remaining level sections. There are usually 3 to 4 such sections per level, acting much like 'time trial' sectors in moto sport race tracks. Once all those sections are connected and level works to my satisfaction, I will start adding detail. This step is merely a beautification pass that enhances the overall experience, but does little to no change to the overall layout.

Here are just a few examples of how I did certain things and why I did them in that way.

After doing the 'Dining Room' mentioned above, my second area was the 'Fireplace Room'. It started off with a simple down ramp and a key light (fireplace) that will give away enemy positions by using strong shadow casting. That room basically defined the nature of most encounters in the first part of the dungeon.

The next area I did was the 'Blacksmith Room'. It is just another version of a 'Fireplace Room', in which the down ramp got replaced with a staircase and fireplace with a smithing area. But the idea remained the same: player is on a vantage point and is able to hear & see the enemies before they can spot him/her. After the first pass, I immediately realised that this 'Blacksmith Room' is perfect for containing a 'loop back' door, as well. Then, I built a secret door area, linked it to my second cell (Ogmund's Tomb_Depths), tested it out a few times and that was it.

It is very important that such 'loop back' rooms have unique and memorable look to them. That way, after player completes the Boss fight, gets the treasure and then opens up the secret door, he/she should be able to almost instantly recognize the Blacksmith Room and think: "Hey, I've been here already, right? Yep, I remember killing these two guys who used to smith swords here".


So, from that point, doing the actual dungeon entrance was pretty straightforward. It started off with some Bandit corpses and an introduction note. Then, a first encounter follows. Enemy is using an 'aggro' state, which means that he is going to warn the player first and attack only after player steps into his 'attack range' circle. On a subconscious level, this kind of setup conveys a message that says: "Hey, this guy was not so aggressive, but instead, he warned me to stay away. Wonder if the rest of his crew will behave the same way?". So, it is like an intro to all encounters that will follow and that are, as mentioned before, allowing player to sneak up on the enemies, if he/she chooses to play that way.

Another thing worth mentioning is the proper use of detail placement. The environment has to look good, but it should never conflict with the gameplay for the sake of good looks. Take a look at this example and imagine that you are seeing pullchain and coin purse items for the first time in this game. By design, pullchain is the Primary Gameplay Element and coin purse is the Secondary Gameplay Element. And barrel is just a backdrop element that reinforces the composition, but doesn't have that much influence on the gameplay.

If I was to arrange this as in the BAD example, then the player would have a hard time choosing between a pullchain and a coin purse. But, after arranging it as in the GOOD example, the two items do not 'compete' for attention anymore, but have enough space to 'make their statement'. And pullchain, being placed higher has the right to say: "Hey! Pick me first, I am more important than that coin purse over there".