Created in November of 2013 within the time frame of 8 days. It provides around 15 to 25 minutes of gameplay.

It is set in an ancient ruin that was once a home of Engelmann, a Companion turned Witchhunter. But now, it is overrun by Skeletons and Necromancers who have imprisoned Engelmann's soul, that now guides player by using note snippets.

Link to a 2:09 long preview video made by "Hodilton" can be found here: YouTube video link

Link to a 9:48 long playthrough video made by "Harley McDaniel" can be found here: YouTube video link

-To have a small dungeon that will provide a 'short & sweet' type of experience.

-To have it set in a dark and foreboding environment that can be a bit claustrophobic at times. I used a lot of low or top-down lighting, coming from floor candles or high ceiling sconces to get a 'ritualistic & evil' type of feel.

-To have Necromancers as guardians and Hagravens as bosses. So I introduced a coven of 3 Hagravens simply reffered to as 'The Sisters'.

-To have a decent ammount of traps in the form of 'floor plates' and 'rune traps'. To compliment that, I made a 'stop & go' kind of pacing, using closed and locked doors wherever it would make sense.

The only real challenge I had with this dungeon was matching the desired scale & pacing with the encounters. Initially, I had way too many encounters and was thinking of cutting them out. But instead, I merged some of them into a new encounter, making them much more interesting. For example, I had one Necromancer who would raise a bunch of Skeletons to protect himself. And few rooms after that, I had Syndra, the first Hagraven Boss who was not doing anything special at the time. So, I deleted the Necromancer and let Hagraven Boss raisee a bunch of Skeletons, making her encounter really stand out and fell like a Boss fight.

The layout was developed in the same way as encounters. I first blocked out all rooms I know the dungeon has to have. Later, some of these were merged into new rooms and additional areas were built to fill in the gaps.

It started off with two most important rooms: 'Engelmann's Chamber' and '2 Hagraven Sisters'. Once that was in place, it was easy to decide on START and END. The optional Garden Room was then put in to add choice to the map. As you can see, the second Cell evolved very little compared to the original sketch. 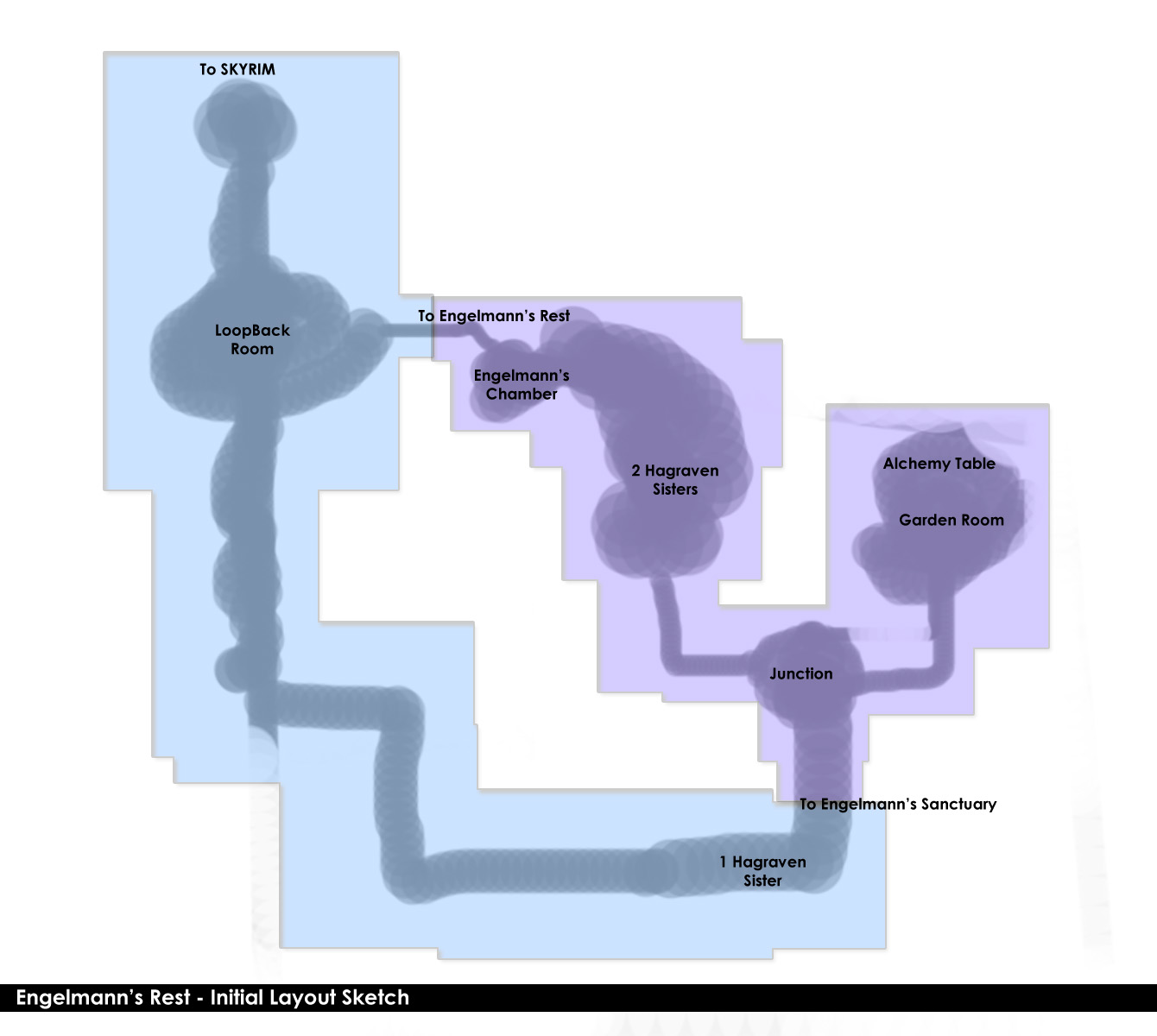 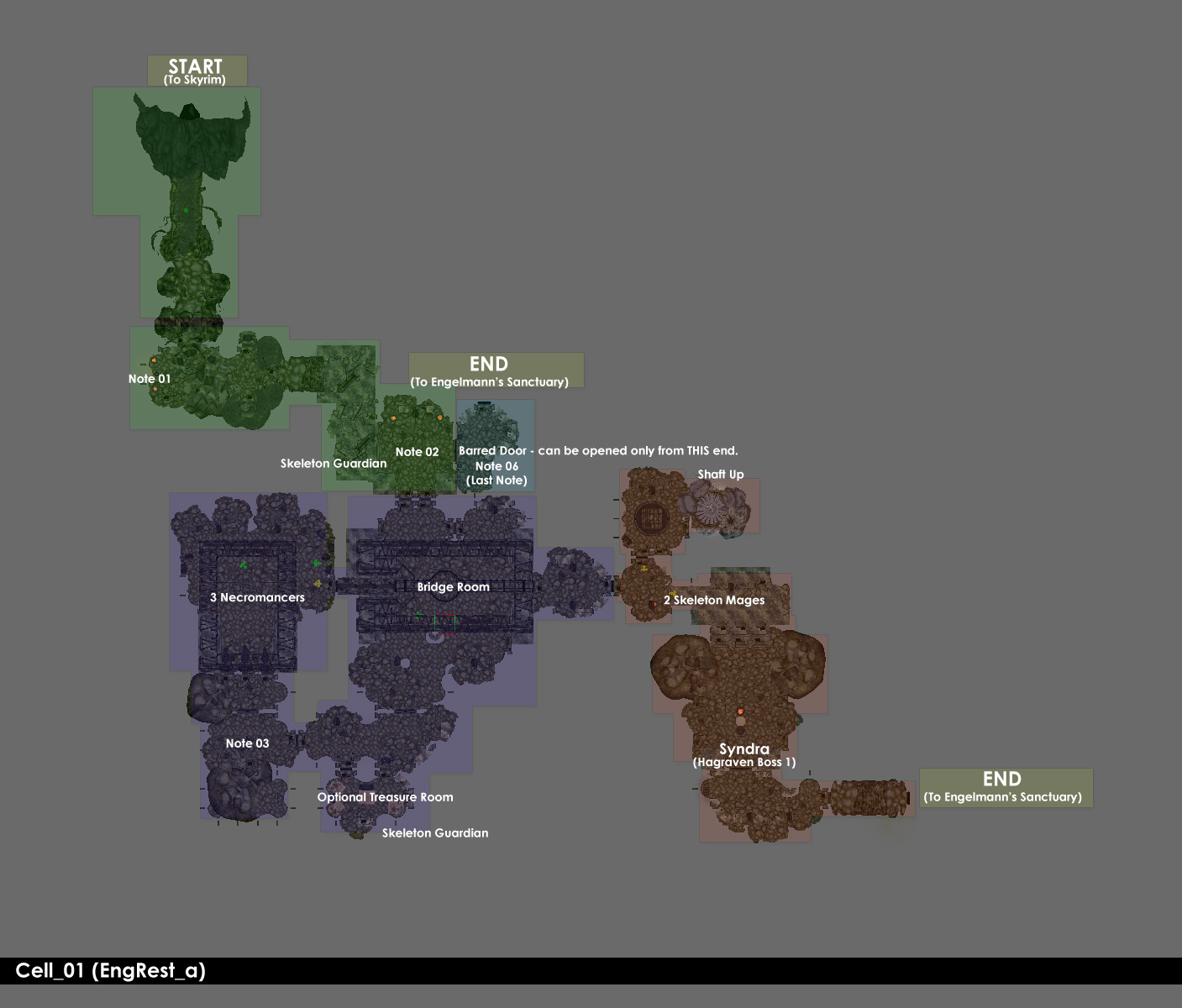 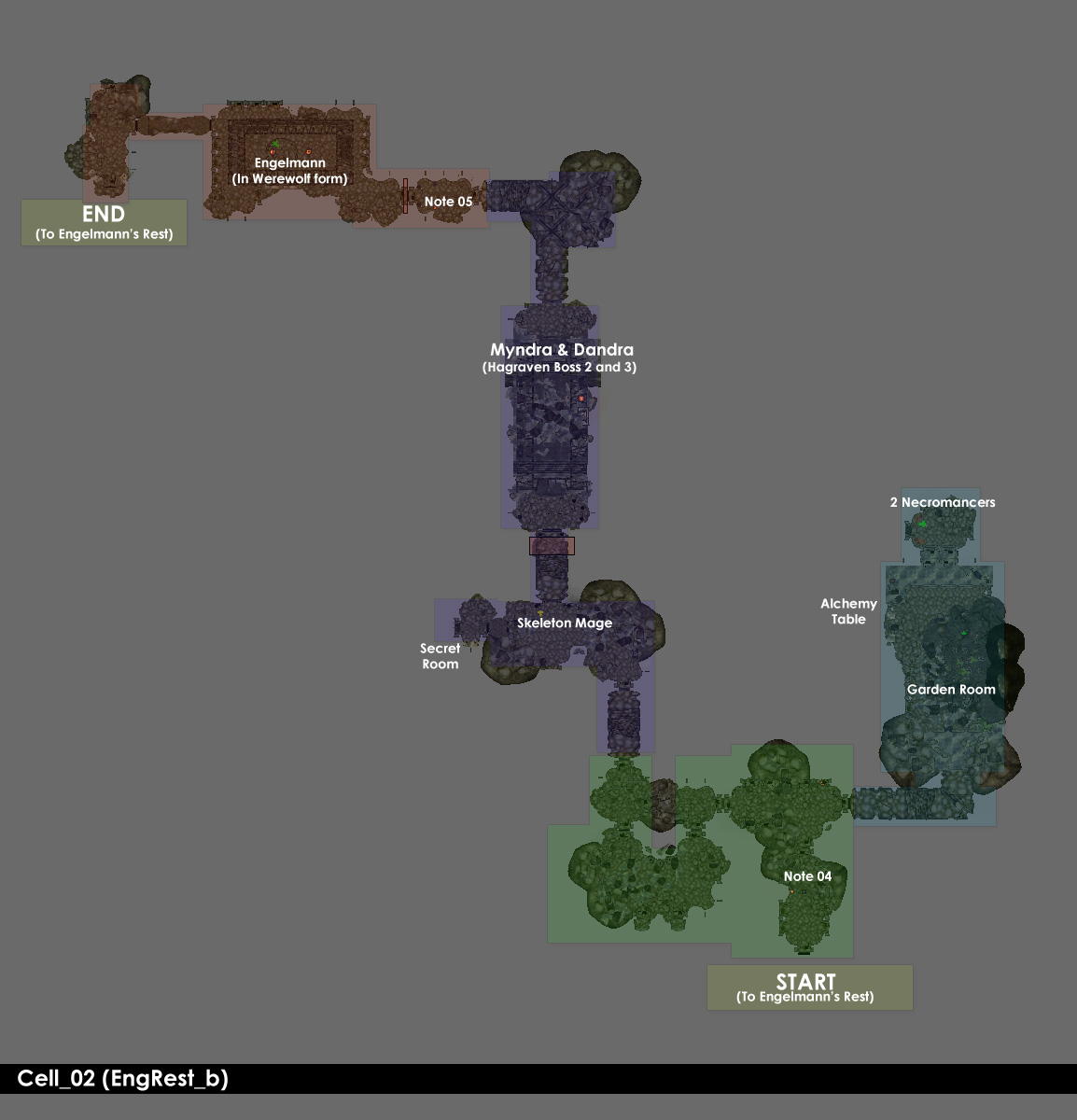 As for the first Cell, the area titled 'Loopback Room' immediately became the Bridge Room and then everything else started branching from that.

I will use starting room to show how I usually use lighting and geometry to guide player. I always want to let the player explore a bit and feel rewarded for it, but without having to guess and walk around without any clue of what to do next. 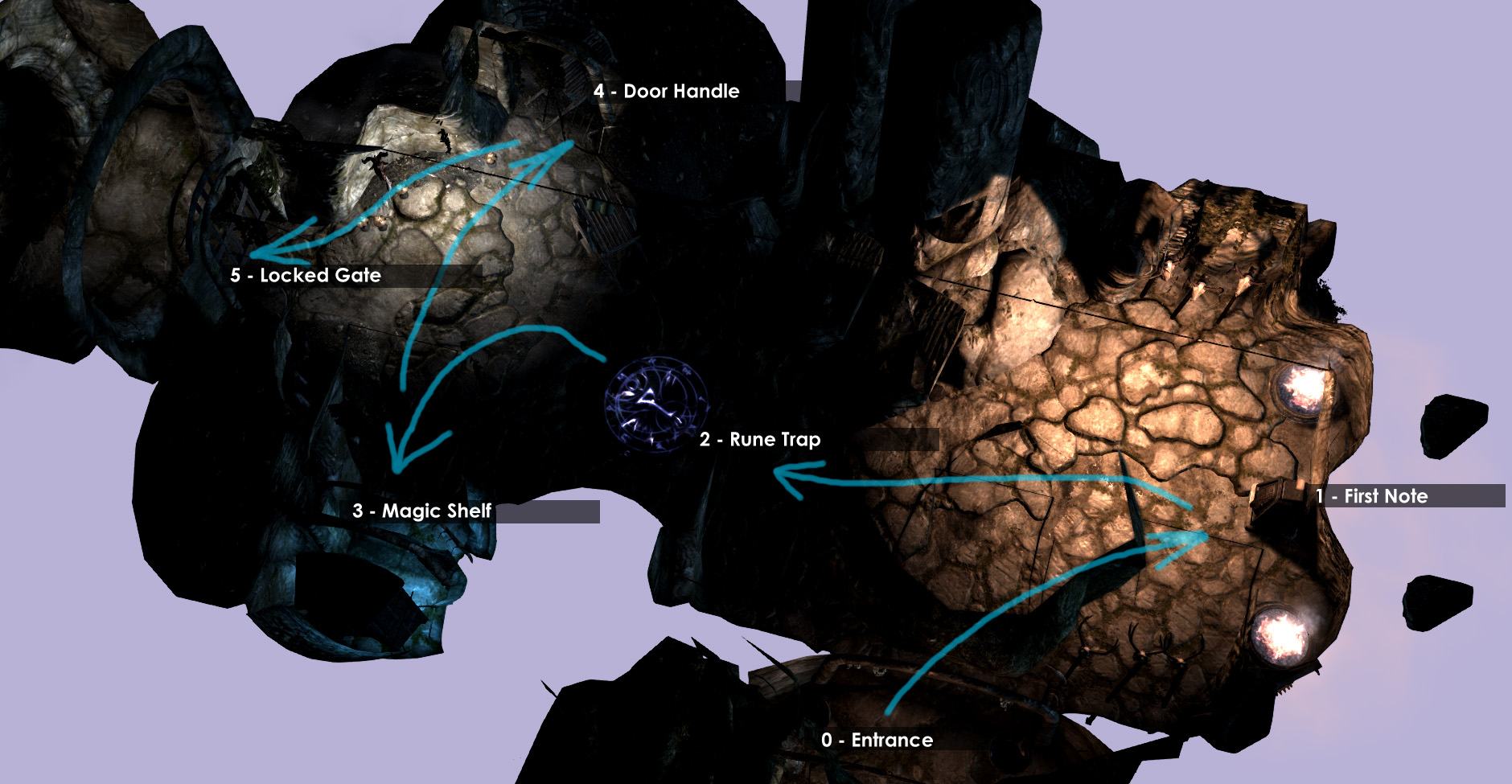 In this example, the arrows show the action order that we want to achieve.

Step 1: Player is looking at the room entrance and the contrast was used for attention focusing. Player is coming in from the cold, blue environment and is naturally drawn in by orange, warm tones of bright torch light. Notice that light position is also contrasted: blue is on the left, orange is on the right, this way sending a subliminal message that this is the right way to progress forward. That is because most people learn (or progress in life) by reading from left to right.

Step 2: We need to draw attention to the Note first and make player ignore the rest of the room completely. Notice how lighting and rubble work together to say: "The path to the left is all caved in and sealed off, there is nothing interesting for you there".

Step 3: After finishing the note, player will be facing a solid wall and for that reason he/she will turn around. If there was no wall, but any kind of open room space, player's first reaction would be to simply move forward instead of turning around.

Step 4: Now, as player turns around, the Rune Trap becomes visible. Placing Rune Trap early on raises the 'trap awareness' and foreshadows Necromancers that player will encounter later in the dungeon. It also acts as a damage-dealing path-blocker, so it must be easy to spot. And to do that, it is placed in the darkest possible area and is a piece that 'divides' the room.

Step 5: After clearing the Rune Trap, there are 3 choices, each within the player's cone of view: left, front and right. Player can see that there is no door handle of any kind, so the next thing would be to start looking around.

Step 6: Since blue is in contrast with the rest of the room lighting, and is divided from it by a patch of darkness, the first thing player will do is to look left. And since the shelf contains useful potions and magical ingredients most people would go and pick that up.

Step 7: After that, player will move to the right and look for the door handle. Wooden carts are placed there to focus the attention and are arranged in a way that will make people look in their direction.

Step 8: Of course, the door handle is nearby and perfectly visible thanks to some additional lighting placed on top of it. Such small tasks, like finding a door handle or a keycard should never be a chore to execute, otherwise playing the level will start to feel like time waste, which is never a good thing.

Again, not two people are the same and cannot be expected to behave in the same way. However, based on my experience it is very likely that majority of players will perform their actions in the order described here.